My Journey So Far...

I am a 38 year old Canadian Paralympian, International Grade 3 Para-Equestrian dressage rider. I also compete in able-bodied British Dressage competitions, so far, up to Advanced Medium level and training up to Grand Prix.  I am currently on the Equestrian Canada National Team Program. I competed as part of the Canadian team at the 2018 World Equestrian Games,  2016 Rio Paralympics and finished 4th Individually at the 2014 World Equestrian Games.

I am also an insured, UKCC qualified riding coach and experienced trainer. I really enjoy teaching a whole variety of clients in a multitude of ways; confidence-building 1 to 1 sessions, polework clinics, position workshops, horsemanship playdates, test-riding! Contact me for more information.

​Currently, I am campaigning my wonderful Gelderlander x mare Fairuza, #wonkyhorse, towards the Tokyo Paralympics 2020. We have met the selection requirements so far and are working to achieve even better results in the 2020 season. She has been competing in able-bodied British Dressage competitions as part of her education and is almost qualified for the Regional championships, from two shows. We have been guinea-pigs in judge training and testing as well as performing our own ridden demonstration for the ABRS National Conference.

I had the ride on the stunning PRE stallion Bailaor XXXIII, owned by Morgan Equine for 2018 and the WEG in Tryon.  'Buddy' and I had a very successful season, qualifying for team selection and then competing in the North Carolina heat. Unfortunately,  the traveling and general intensity of the competition schedule at that level was a little much for this grand old gentleman and our results weren't quite as we had hoped. He was however the highest placed PRE horse in the competition. He is now back with Morgan Equine and for sale. He would be an incredible schoolmaster for anyone wanting to further their dressage education.

After Rio, I qualified my Rio ride, Double Agent, for the  World Equestrian Games in Tryon, USA 2018, however, Darcy moved on to the next chapter of her life with the wonderful Avery Maude Dressage as her GB team Junior ride.

Many people ask me 'Why Canada?' Well, I have dual Canadian/ British Nationality due to my mother being Canadian and I choose to ride under Canada's beautiful maple leaf. I live in the UK as Para Equestrian is very much a Eurocentric sport so it makes sense for me to train and compete where I am against the best of the best all the time.  I have been very fortunate to be supported by Canadian government's Sport Canada Athlete Assistance Programme as a fully carded athlete for many years.

​2016 as the Paralympic year, brought a whole new level of challenges. Here is our Paralympic story.
Rio Paralympics
​2015 was really exciting, my 4th place at the 2014 WEG opened many doors for me! I was invited to compete at the amazingly beautiful Al Shaqab CPEDI3* in Qatar. What a glamorous start to the season! Then we did a Canadian Team tour of Europe where we swept the board at several CPEDI3*s. Double Agent and I were instrumental in getting the Canadian team qualified for the Rio Paralympics as well as meeting team selection criteria ourselves 11 times.

I had a wonderfully successful year in 2014 - representing Canada on the 2014 Canadian Team European Tour with 2 horses and at my first major games, the World Equestrian Games 2014. Finishing 4th individually at the WEG has been my absolute career highlight so far! I was also awarded the Lincolnshire Sports Disabled Athlete of the year title for my sporting achievements and my community involvement, I am patron of Sport for Willoughby School for profoundly disabled students.

In 2013, Wonderboy and I represented Canada at Mannheim, Roosendaal, Hartpury and Bishop Burton CPEDIs as part of Team Canada. My second horse, Double Agent was used by fellow Canadian, Ashley Gowanlock as her grade 1b mount for the tour. 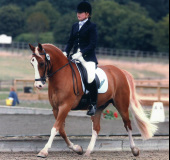 I have always loved dressage and training horses. After studying at Aston University, Birmingham, I worked for Gareth Hughes at Aspen Grove Dressage as a BD apprentice for nearly 2 years. I took my little Welsh Cob, Calerux Cosmonaut with me. It was Gareth who suggested I try my hand at Para Dressage. In 2006, we were invited to the Para team selection trials and got through to the final selection stage for the World Class Potential programme. Gareth gave me a terrific education and I owe him a great deal for the opportunities he gave me.

While I was there, the chance came up to train with the legendary Arthur Kottas-Heldenburg, formerly Chief Rider at the Spanish Riding School. I trained with Arthur for 3 years, every time he came over. He has stopped coming over now so I started to train with Conrad Schumacher. Conrad has trained just about all the major Olympic dressage nations' teams. In 2013, I trained with Dutch Olympian, Ellen Bontje. More recently, Gareth Hughes has become my principle trainer again.
I have Rheumatoid Arthritis in all my limb joints and my neck, shoulders and jaw. This started when I was 15 and has progressed through my body. Although RA is painful and makes life awkward it has given me the opportunity to compete in top level Para competition. Riding gives me tremendous freedom from my condition. I use straps from the stirrups to the girth, to stabilise my lower legs and bobbles on the reins to help me grip. I take Anti-TNF medication and painkillers and also have regular chiropractic treatment to help keep my body working evenly.

I was born into an oddly sporty family - my Mother is horsey and my Dad was a World Champion Skeet shooter. I learnt the value placed on sporting success early. I grew up surrounded by elite sportsmen and women of many different disciplines and their entourages. As a result, I have never seen these extraordinary athletes as anything other than 'just' people. And I could see the value of all the preparation and the back-room boys working behind the scenes to allow the athletes to succeed.